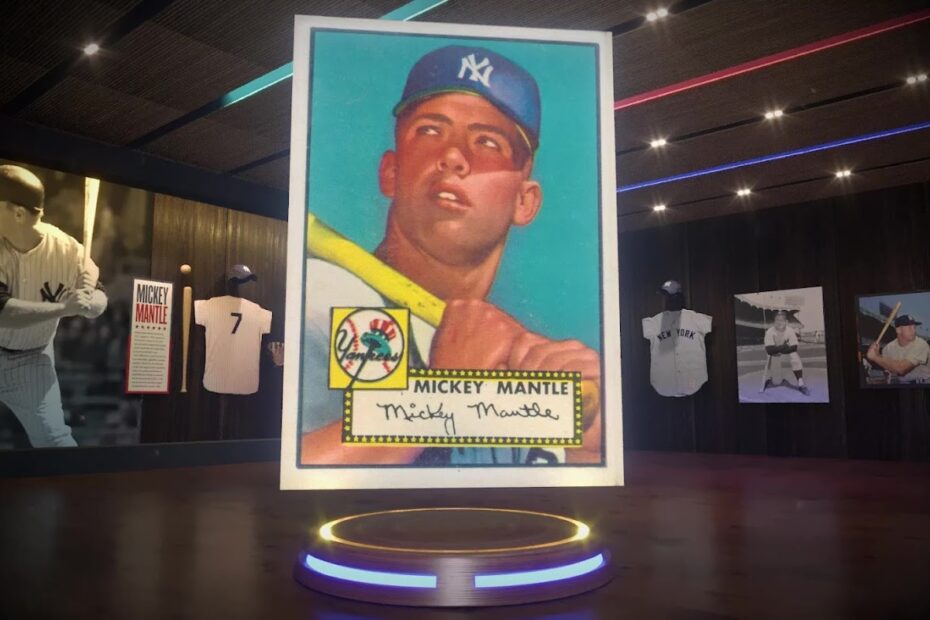 This card from the Topps 1952 collection celebrates Mickey Mantle’s famed baseball card, which is now made into a rare digital collectible. This NFT highlights Mantle’s legacy, thanks to the Mantle Estate and Major League Baseball, cementing his place in baseball history.

The sale among the biggest ever in the sporting NFT panorama placed next to the NBA’s Top Shot bucks sales of $230,000 and $210,000 for limited edition LeBron James collectibles.

Mickey Mantle NFT sale among the biggest ever in the sporting NFT panorama placed next to the NBA’s Top Shot’s Bucks’ presale of limited edition LeBron James collectibles for $230,000 and $210,000 respectively.

This digital media is accompanied by some very special items. A historical video and memorabilia displaying Mantle’s career are also included in the purchase of this collection.

About Mickey mantle NFT sale Collectible is officially licensed by MLB, and is sold in collaboration with the Mantle Estate. The winning online bidder will also be granted a 30 minute interview with Mickey Mantle’s two sons, Danny and David Mantle.Who won the mickey mantle NFT Topps Auction is unnamed or kept ( private /45445B) on Opensea.

According to Danny Mantle and David Mantle

“This trading card has been part of my father’s legacy for 70 years and I am amazed that even today so many collectors and baseball fans have been impacted by it.”the Mantle sons stated, “We are very pleased to share this piece of history with Topps and NFTs.”

The 1952 Topps Mickey Mantle is a staple in every true hobbyist’s collection. One of the most iconic cards, this baseball card appears within what is considered to be the Holy Grail of sets: the 1952 Topps set. A key feature in this release was its use of short prints to boost collectibility – an idea that resembles that of modern day inserts and parallels. The Mantle has become even more popular due to the fact that many high number short printed .

It has been sold to Rob Gough, a seasoned entrepreneur who is most known for his CBD clothing and DOPE clothing lines. His film credits include the 2018 film Billionaire Boys Club .

“I’ve been searching for this Holy Grail, the Mona Lisa of sports cards,” Gough told

He also believes he got quite a bargain.

Mantle played with the Yankees between 1951 and 1968. He was a hero both on and off the baseball field, …

This particular card of the 1952 Topps Mickey Mantle is known to the hobby. It was the same one that sold for $2,880,000 million in April 2018 earlier before Gough brought it.

Who won the mickey mantle NFT Topps Auction is unnamed or kept ( private /45445B) on Opensea.

How Much did Mickey Mantle NFT sell for?

Rob Gough, a seasoned entrepreneur who is most known for his CBD clothing and DOPE clothing lines brought Mickey Mantle card for $5.2 Million

Why is Mickey Mantle card so expensive?

According to industry pundits 1952 Topps baseball cards are highly sought after because they were the first set that Topps produced that year. Due to overproduction, thousands of the cards were dumped into a nearby river in 1960. The Mickey Mantle card is considered one of the most rare and valuable cards today, with only six PSA graded 9’s still in existence!

Which is the most Valuable or rarest Mickey Mantle baseball card ?

A rare Mickey Mantle baseball card sold for a record-breaking $5.2 million, breaking the previous record for a baseball card when it was purchased by actor and entrepreneur Rob Gough, star of “Billionaire Boys Club”.

Why Mickey Mantle is so famous?

Mantle was an idol to millions, known for his remarkable power and speed as well as his every man personality. Between 1951 and 1968 while batting clean-up, Mantle patrolled center field while the Yankees won 12 AL pennants and 7 World Series.